If you are looking to start a spirits brand, grain alcohol is a great start. We can provide you with high-quality grain alcohol. The grain alcohol we provide at Sasma is always superior quality at the prices that fit your needs. Grain alcohol is made by fermenting and distilling several different types of grains. The most popular being rye, corn, wheat, barley, and rice. To learn more about the grains we use, read more below.

What is grain alcohol, the production process

Grain alcohol is made from fermenting grains. It is a distilled neutral spirit and it is the purest form of ethyl alcohol. Terms also used for this type of alcohol are neutral grain spirit, ethanol or rectified spirit. As mentioned above, grain alcohol can be made from different types of grains.To produce grain alcohol, we start by breaking down sugars in the grain using yeast. The next step is to repeatedly distill the mixture, to produce the grain alcohol. Grain alcohol is a form of alcohol that is pure and has a high alcohol content. The end product is a clear liquid that is highly concentrated pure, clear, colorless and odorless. The key to the production process is the quality of the grains and the distillation process. Grain alcohol is distilled five times.We offer organic options.

The use and application of grain alcohol

The use of grain alcohol is diverse. It can be used for redistilling gin. In addition to gin, it also has several industrial applications. Neutral Alcohol 96% made from grain is also used in other industries such as the Pharmaceutical and Medical Industry, Cosmetic Industry and the Food & Beverage Industry. In the food industry it can be used in sweeteners, bonbons with liqueur, vinegar and vanilla extract. In beverages, it can be used to make Vodka, it can be matured and made into Limoncello and as mentioned above, it can be re-distilled in a pot still for making Gin. Lastly, it can be used for commercial and industrial use in hand sanitizer production, cosmetics and pharmaceutical purposes.

We are one of the world’s largest independently owned suppliers of bulk premium alcohol, organic alcohol and bulk spirits. We have an extensive network of premium alcohol distilleries worldwide. Therefore, we can source raw materials and various grades of alcohol at the most competitive prices from all over the world. Get in touch today to learn more about our extensive product offering.

HOW ITS MADE During this process, the grains are repeatedly distilled which then creates a highly concentrated, clear, and odorless spirit.   STEP ONE Choosing the Raw Material During this step, the type of natural grain is chosen for fermenting and distilling. The most popular grains used for Neutral Grain Spirits are Corn, Rye, Wheat, Barley, or Rice.   STEP TWO Fermentation of the Chosen Grain Once the grain is chosen, it’s time to begin fermentation. Fermentation is a very common term used across the alcohol industry. It refers to the biological process in which sugar is converted into alcohol and carbon dioxide. The catalyst in this process is yeast, used to break down the sugars and convert them into alcohol and other bi-products.   STEP THREE Distillation Once fermentation is complete, distillation begins. This is the process in which the fermented grain is converted from a liquid into a vapor, then back into a liquid. The grain that’s being distilled determines the distillation method: column or pot still. During this step, the product from the fermentation step is boiled to a certain temperature to produce the final product, Neutral Grain Spirits. Alcohol (ethanol) has a lower boiling point than water, therefore evaporating into a gas during the distillation process. After it’s captured in its gas form, it cools down and leaves us with a liquid mixture of highly concentrated alcohol.   Certificates ISO 9001, ISO 22000, Lloyd's Register Available upon request Kosher, Non GMO 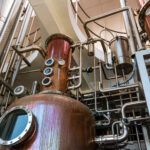 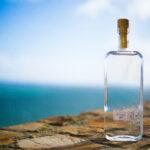